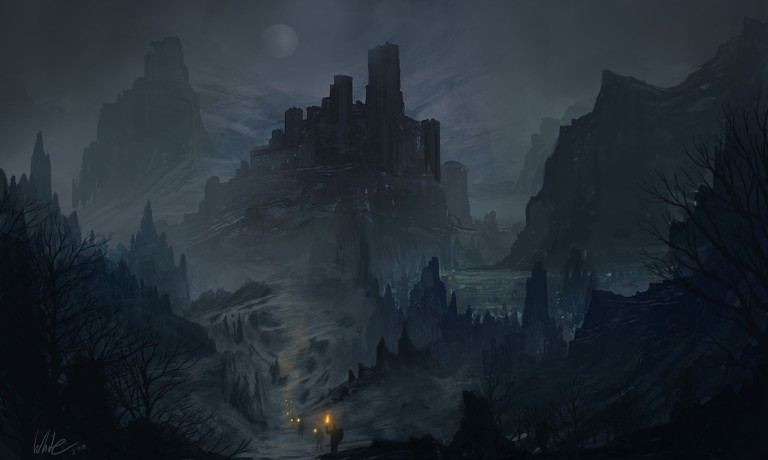 Icy rain fell upon the inhospitable encampment of Legionnaires until the deepest hours, mid of night; yet when it subsided, replaced by seeking, numbing cold that permeated to the bone.  Those among the ranks of the Demonfey received ample protection from the biting chill in tents that were sufficiently weatherproofed, and these warriors were additionally supplied with warm woolen blankets and interior sources of heat to fend off the cold while those recently mustered, who were deemed expendable, were left to huddle together with a meager, sulfurous fire their only source of warmth.

In order to gain any measure of comfort and to avert the worst of the fire’s fumes, most of the new recruits covered their faces with bands of cloth torn from their already shoddy uniforms, but others were unable to tolerate the malodorous reek of the insignificant fire.  These frequently retreated into the darkness where the air was less foul, but being any distance from the conflagration meant they were forced to endure the permeating cold unprotected, which lead them to wrap their wings round themselves in a vain attempt to keep warm until the queasy sensation produced by the sulfur fumes abated and they could return to the ineffectual warmth of the fire.  Restively passing the long hours of the night in this exhausting manner, these ill-fated Fey greeted the gray-green light of new day with weary gazes and limbs numbed by the frosty conditions as they awaited their fate with the grim resolve of the hopeless. …..

.
Hvyyrbachvra is pronounced very much like it is written.  H-veer-bach-vra

A Preview of Dark Fey Breaking Into The Light.

Dark Fey Breaking Into The Light asks the questions, can we truly understand another’s misery without knowing the extent to which they suffer?  Would we willingly risk our lives for someone without experiencing some measure of their pain, despair, or anger?  Like any good fantasy, this final saga of the trilogy sets the stage with dramatic events that test boundaries and push characters to their limits.  Readers learn what it’s like to be one of the Reviled through descriptions that are darker and more intense than either of the previous books, but with good reason.  I hope to elicit a reaction in the reader similar to those the Fey of the Light experience by showing them firsthand what the Reviled (our child soldiers) have suffered.  I also pose the most important concept of the trilogy:  The only way the achieve Peace is by becoming Peace.  Through this thought-provoking concept, I open the door to an unexpected and powerful conclusion.