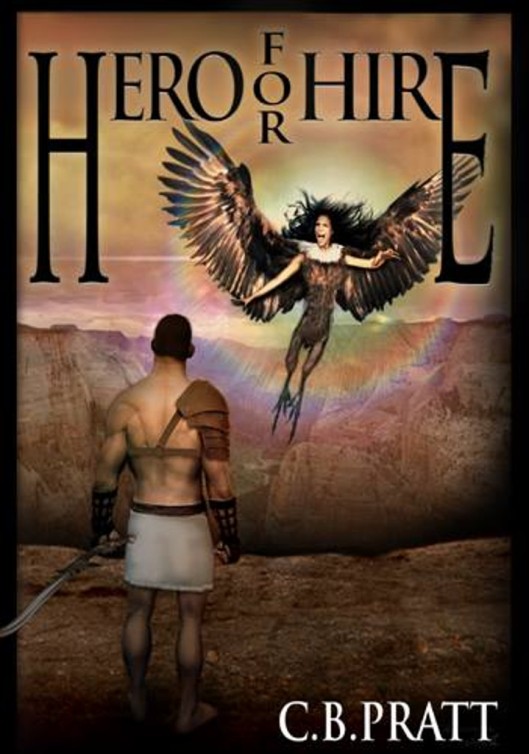 Today I am welcoming fellow author C.B Pratt, who will be sharing one of her Fantasy Characters with us through a Character Interview. The longest C.B. Pratt has ever lived in one place is seven years. Now somewhat settled in Orlando, Florida, she shares a house with a wizard, a snoring dragon disguised as a dog, and lots of bookshelves overloaded with arcane knowledge. A mix of wanderlust and a lifelong addiction to myths and fantasy fiction gave her the idea to write about Eno the Thracian, a traveling hero for hire of the Bronze Age. When not writing, C.B. is letting the dog out…then letting the dog in…then letting the dog out…

Her Character’s Name: Eno the Thracian

Her Book/Series Name: Hero for Hire

While all the Big Name heroes are off fighting the Trojan War, Eno the Thracian is the hero of choice for anyone with a mythological problem, from a mini-dragon menacing your flocks to a goddess on the edge of destruction. With a body like living rock, a deep knowledge of life, death, and olive oil, Eno lives up to his motto: Swift Sword, Reasonable Rates. Starring in five stand-alone but connected novels, Eno the Thracian has found friends and fans all over the world.

So…how’s the hero business these days?

First off, you have to understand what a ‘Hero’ is. He’s not just brave, daring, and astonishingly handsome…wait. Let’s start over. It’s a job. Like artist or philosopher. You want to entertain, you hire a musician. You want to build a fountain, you hire a stonemason. You’ve got a monster tearing up a vineyard, you hire a hero. Lately, the man for the difficult jobs has been me.

I apprenticed for a half dozen years or so with another professional Hero before taking over his contracts when he retired to marry the wall-eyed daughter of a local baker. He gave me a sword and a start in life. But what really boosted my career was the Trojan War. With all the usual heroes off fighting and the kings neglecting their kingdoms, there’s a lot of opportunities for a useful guy like me. And monsters have been increasing lately, both in numbers and in size. It’s a growth industry…if you live.

Tell us a little about where you grew up. What was it like there?

I grew up in the mountains of Thrace, with the sheep, the shepherds, and the wolves. My tribe is the Maedi. While our womenfolk live in huts year round, the men follow the herds, going up to the high country for the summer grasses and returning in the winter. We worship the same gods as the Greeks; some claim that Ares first came from our lands. While I love my home-land, I haven’t been back much. I grew up bigger than most and when I was about 16, I came down to the ‘civilized world’, where I’ve met more scoundrels, dangers, and lies than I would have met in a lifetime in the hills. Of course, I was never all that crazy about sheep. Not the greatest conversationalists.

After a few years, I settled in Athens. It’s an up-and-coming town, where the temples are slowly being replaced with stone, the king doesn’t get into much trouble or charge high taxes, and the weather’s good. I get a lot of clients from word of mouth but also from my sign in the agora: Hero for Hire. All monsters dispatched from carnivorous geese to Minotaurs. Special rates for multiples. Eno the Thracian at the sign of the Ram’s Head, one flight up.

What can you tell us about your latest adventure?

The biggest case I have had so far came about because of Aphrodite’s Thunderbolt. I saw this girl in the marketplace and – bam! – I was in love. But my purse was empty and her father was asking for a big bride-price. So off I went to catch a living Harpy. I figured I’d get paid twice for the same monster – once by the king of the island the Harpy was terrorizing, once by another king who liked to hunt monsters for trophies. Only it didn’t work out like that. Somehow the simple cases always turn into something worse…so much worse.

What did you think when you met a god for the first time?

A wise man makes his offerings and prayers to the Gods, but hopes in his heart never to meet one. I haven’t been that lucky. The Gods started taking an interest in me during this case; never a healthy place for a mortal to be. When I first met Aphrodite, I was overwhelmed by her beauty, awed by her power, and terrified by the ‘motherly’ interest she took in me. She made me her warrior, whether I liked it or not. Henceforth, I was working for Her. And her enemies became mine. But a goddess’ enemies are on a scale far exceeding anything I’ve ever fought before. When the fate of Olympus rests on a mortal’s shoulders, a wise man runs away. I guess I’m not that bright.

What was the scariest thing in your adventures?

Jumping blindly into the Underworld, with a extremely pissed-off minor goddess under one arm…dying on the way down. That is a moment I try not to remember, thank you very much. Actually, that wasn’t as bad as what happened later on…

Tell us a little about your friends.

There’s something I refer to as ‘hero math’. It doesn’t matter how many people start out on an adventure, the hero comes back alone. That’s why I try not to involve too many people in my ventures but somehow they keep showing up. Like Phandros. A drunkard and former teacher to the 50 sons of Pharaoh, he started getting the idea that I need somebody to look out for my interests. So he started tagging along and, if I’m going to be completely honest, he did help…a lot.

Whom (or what) do you really hate?

Everybody always thinks I must really hate monsters…but I don’t. You know, they didn’t ask to be born part-dragon, part-goat, part-lion. If it were up to me, I’d move them somewhere that they can’t get into trouble with people…or cows. But sometimes you have to take strong action. What I don’t like is people who decide to be evil. They always  have good reasons for turning bad, which they usually want to tell me all about in excruciating detail. I don’t have much patience with evil viziers, power-mad queens, or spoiled princelings…especially when they’re trying to kill me in inventive and painful ways.

What’s your favorite pastime? Any hobbies?

I’ve learned to enjoy cooking. I’m a big guy; I eat a lot. It gets expensive eating out on the road all the time. I live above a taverna in Piraeus Port called the Ram’s Head. They’re nice folks who don’t mind taking messages when I’m away. I also collect Minoan pottery when I can afford it, which isn’t often. That stuff is getting rarer all the time and you wouldn’t believe the counterfeiting that goes on. Mostly, though, my off-hours are spent training. Muscles like these don’t build themselves, you know.

What does the future hold for you?

It’s a little crazy, maybe, but I’ve been thinking about starting a school for heroes. There’s a lot that you need to know *before* you start the on-the-job training or the ‘getting killed’ part. For instance, cleaning ichor off your leather armor, knowing which head of a hydra is the leading one, and the vital importance of ducking early and often. Most of these young hot-heads just set off with a magic sword and helmet and have no idea what the Hades they’re doing. That’s not so bad but they tend to find a lot of trouble and someone like me has to get them out of it.

For the immediate future, though, I have a trip planned back to Thrace to see my mother. How much trouble could that be?

Please be sure to discover more about C.B through visiting her social places:

Link to book on Amazon: https://www.amazon.com/Hero-Hire-Historical-Monsters-Thracian-ebook/dp/B00D6KPC1S

Link to book on Goodreads: https://www.goodreads.com/book/show/19272592-hero-for-hire

Hero for Hire, The Stone Gods, Dark Mountain, Rivers of Sand, and Eno and the Dragon. The first two are available on Audible. Also a free novella, Eno and the Pirates: https://www.instafreebie.com/free/EzHcA

launches a project every month