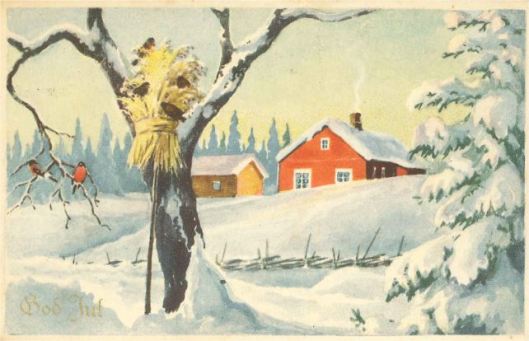 It was the first day of December and it was snowing. It had started early in the morning when no one was awake. The soft powdery specks had fallen so quietly not even the winter birds had stirred in their sleep. Now a white-washed sheet of tiny fairy diamonds covered the garden gnomes and the bronze-fashioned forest nymph, giving the town garden a touch of Wonderland splendor. There was hardly any engine sounds, only a faint twitter of frosted early birds muffled by the gentle stillness of water being transfigured into ice. A lamp from a window cast a warm yellow shadow on the sparkling china rug, followed by ringlets of brightness and the fluttering of wings. A little figure could be seen in the window. It was a girl, perhaps about eight years old. She was wearing a silver-colored crown on her head, and she kept waving a starry wand back and forth, but nothing seemed to happen. The window sill was lined with porcelain Christmas Angels wearing red frocks and sporting a halo above their golden-haired heads. “Why don’t you just try flying?” said the girl. She opened the window and a cold wind blew the tiniest angel unto the floor. The little girl sighed. “Vieeennnaaaa!! What are you doing? close that window!” Vienna closed the window before her mother had even started to climb the stairs. She gave another little sigh and headed down for breakfast. So you see, she couldn’t see the tiny flutter behind the snowed-in clay pot in the garden. She couldn’t hear the bell-like whispering like falling silver. “See, Marciana, I told you she believed! Nothing is lost yet.” ……

“Oh, there you are, Sabine.” Marciana tip-toed out from her hiding place, dusting her feathers and tucking her scarf tighter around her little body. “You missed her, Marcy! Why are you always so timid?” “Who did I miss, Sabine?” “The human of course!” Marciana chuckled and rolled her eyes. Sabine was always going on about humans. “Come on, let’s go home while it is still snowing.” Sabine sighed. Nobody ever listened to her! The Snow Queen had said that they needed a human, and this girl, with her little winged figurines, was just perfect! “We have to hurry, Sabine, the sun is going to peak at any minute.” Marciana took hold of a snow flake and tapped it with her pinky, and the snow flake grew until it was big enough to carry the little fairy. “Why can’t we just use our own wings?” complained Sabine. “You know the magic only works with snow, Sabine.” Sabine knew that that was what the Snow Queen said, but she had never quite believed it. But nevertheless, she did as she was told, and joined Marciana on her own snow flake, and together the two little fairies ascended, and vanished into the white flutter of shimmering winter crystals.

ORIGINALLY POSTED ON TALES FROM THE FAIRIES AND USED/REPOSTED BY TRINI LIND’S KIND PERMISSION.  PLEASE FOLLOW THE CONTINUING TALE EACH DAY OF THE MONTH THROUGH DECEMBER.