“Oh, not now!”  She cried out into the hush of her small home, but the persistent answer came back all too quickly.

“Now, Ayla.”  The whisper was so close, the thought piercing her mind as if he stood mere inches away from her and she swayed under the potency of his presence, her lashes fluttering.

“Where?”  She thought, seeking him, but not finding him.  How could he be so close and, still, not be inside the cottage?  He was closer than ever before.  Once again, his reply to her question was instantaneous.

“Here.”  His deep voice echoed in her mind, but she opened her eyes just the same, searching her parlor, expecting to see him at last; but her two-dimensional thinking brought insidious laughter to the edges of her consciousness and she shook her head at her own folly.  Fool!  She thought, admonishing her own simplicity.

“Here inside my mind?”  She inquired, almost in disbelief and once more the answer came back to her so quickly it seemed he was capable of reading her thoughts before she could even think them.

~An Excerpt from Dark Fey: The Reviled~ 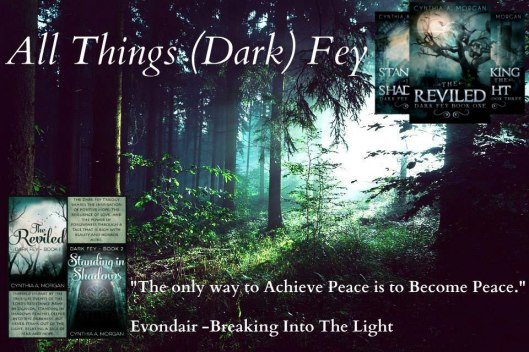 For those of you who find Dark Fey of interest, it now has it’s own Official Website! You can explore the Realms of the Award Winning Epic YA Dark Fey Trilogy, Discover more about the lands the Fey inhabit, read free book teasers taken straight from the stories , learn insights into the characters through in-depth descriptions,  read a few behind the scenes secrets and more.

For those of you who find Dark Fey of interest, it now has it’s own Official Website! You can explore the Realms of the Award Winning Epic YA Dark Fey Trilogy, Discover more about the lands the Fey inhabit, read free book teasers taken straight from the stories , learn insights into the characters through in-depth descriptions,  read a few behind the scenes secrets and more. 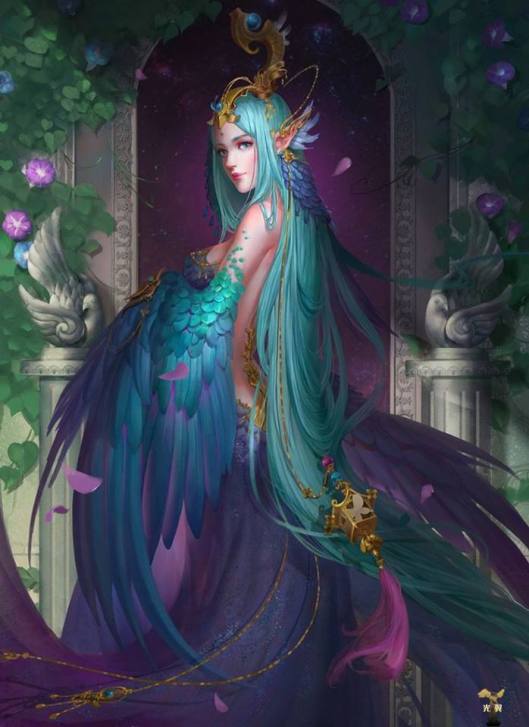 Magical Grace upon the Wing,

Like a river, her teal hair flows,
Too beautiful to put in prose.
A finer creature, I have not seen,
This one must be a queen.

Feathers of purple, teal and green
Soft as down, with iridescent sheen.
Whilst the lady soon take flight?
And soar into the rosy night?

*****This Friday Fantasy is INTERACTIVE. Since I do love collaborating, I’ve written the first verse and Invite YOU to share additional verses Inspired by this Beautiful Artwork. Post your verse in the comments section and I will add them to the original verse throughout the day. Be sure to include your name and (if you like ) a link to your blog.

Amid the Vestiges of Spiraling Night,

Twirling to the Nightingale’s Lyrical song,

Mystical Muse, Neither right nor wrong,

There She Dances, both Imminent and Lore,

Peace and Parody Her Beguiling Spell,

And Mortals, Her Graces, ever Implore.

For those of you who find Dark Fey of interest, I’ve spent the day developing my website. You can now explore the Realms of the Award Winning Dark Fey Trilogy. 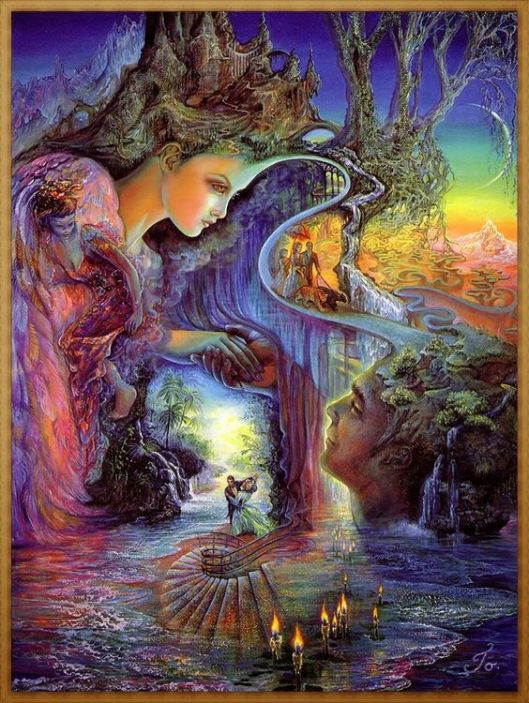 A misty call from Dryad’s Lips
A tinker’s touch like feather tips
Brought upon a mighty roar
From magic steeped in fairy lore.

Such was the stirring, deep as yon’ pound
It shook the very forest ground
And our faerie hero came awake
A regal nymphadora from lovers’ lake.

His amber eyes with bejeweled glitter,
Colourful as Autumn’s litter
Sought the visage of his Dryad Bride,
But could not find her, though he tried.

A gust of muddy darkness brought
The sound of broomsticks from abroad
And witching hour’s wishful sight
Showed to him his captured bride.

Upon the Midnight’s brazen tide
The shimmering aspect of his Beloved Bride
Bound with gnarled ropes of leather
Captive to the loam, a Trollish Treasure.

A distrusted moon on the edge of things
Told a tale of magic rings
With Light that mourned the darkest night
And Sirens’ song to wrong the rights.

The Magick sang it’s Sweetest Song
In spite of anger and in the face of wrong,
The Magick Whispered of Finer things,
Of the Mystery that only Magick Brings.

He spoke finally: “There is a prize.”
She drifted slowly, like a ghost, from his side
And nodded, while leaves grew from her eyes.
He faintly smiled, and kissed his bride goodbye.

Yet as the Magick played its melody
His wings grew rigid; then tinted green
As their Sweet embrace became eternal Rhyme
Twain became One, Clasped throughout Time! 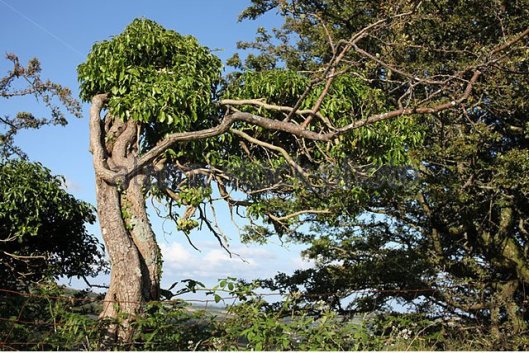 This magical fairy tale is the result of a wonderful collaboration between Trini Lind of Paths of the Spirit and Tales from the Fairies whose beautiful blogs of light, inspiration, and magic I highly recommend. (her verses are denoted in italics)  I thoroughly enjoy Trini’s writings and hope you shall also.

Thank You Trini for honouring me by sharing the magic of your imagination with me to bring such an enchanting story into being.

It was the first day of December and it was snowing. It had started early in the morning when no one was awake. The soft powdery specks had fallen so quietly not even the winter birds had stirred in their sleep. Now a white-washed sheet of tiny fairy diamonds covered the garden gnomes and the bronze-fashioned forest nymph, giving the town garden a touch of Wonderland splendor. There was hardly any engine sounds, only a faint twitter of frosted early birds muffled by the gentle stillness of water being transfigured into ice. A lamp from a window cast a warm yellow shadow on the sparkling china rug, followed by ringlets of brightness and the fluttering of wings. A little figure could be seen in the window. It was a girl, perhaps about eight years old. She was wearing a silver-colored crown on her head, and she kept waving a starry wand back and forth, but nothing seemed to happen. The window sill was lined with porcelain Christmas Angels wearing red frocks and sporting a halo above their golden-haired heads. “Why don’t you just try flying?” said the girl. She opened the window and a cold wind blew the tiniest angel unto the floor. The little girl sighed. “Vieeennnaaaa!! What are you doing? close that window!” Vienna closed the window before her mother had even started to climb the stairs. She gave another little sigh and headed down for breakfast. So you see, she couldn’t see the tiny flutter behind the snowed-in clay pot in the garden. She couldn’t hear the bell-like whispering like falling silver. “See, Marciana, I told you she believed! Nothing is lost yet.” ……

“Oh, there you are, Sabine.” Marciana tip-toed out from her hiding place, dusting her feathers and tucking her scarf tighter around her little body. “You missed her, Marcy! Why are you always so timid?” “Who did I miss, Sabine?” “The human of course!” Marciana chuckled and rolled her eyes. Sabine was always going on about humans. “Come on, let’s go home while it is still snowing.” Sabine sighed. Nobody ever listened to her! The Snow Queen had said that they needed a human, and this girl, with her little winged figurines, was just perfect! “We have to hurry, Sabine, the sun is going to peak at any minute.” Marciana took hold of a snow flake and tapped it with her pinky, and the snow flake grew until it was big enough to carry the little fairy. “Why can’t we just use our own wings?” complained Sabine. “You know the magic only works with snow, Sabine.” Sabine knew that that was what the Snow Queen said, but she had never quite believed it. But nevertheless, she did as she was told, and joined Marciana on her own snow flake, and together the two little fairies ascended, and vanished into the white flutter of shimmering winter crystals.

ORIGINALLY POSTED ON TALES FROM THE FAIRIES AND USED/REPOSTED BY TRINI LIND’S KIND PERMISSION.  PLEASE FOLLOW THE CONTINUING TALE EACH DAY OF THE MONTH THROUGH DECEMBER.

If you hold your breath amongst the leaves
And trees a’hushing by
A quiet whiff of lover’s smoke
Somewhat misty-eyed.
A wild wind rushing in your sleep
And you, a little girl upon the moor
Enchanted by the twisted chimes
Pulling at your feet.
Step then upon the trail
Follow the allure, a lass
A’ wreathed by burning sprigs
And a handsome troubadour.
But the gloom still deepens as we speak
And the lilies hastily swim ashore
And the innocence of Summer
Must hearken to the fall.
Stop then your tread, little girl, and
Observe, you’re drowning in his pond
For straying maids must always heed
To the Nighter’s loving call.

* Note: The Nighter, or the Nykk/Nøkk as he is called in Norway, is a dark faerie creature from Norwegian folklore. He is said to live in woodsy ponds and lakes and his aim is to find a bride as he is very lonely. He takes on the form of a handsome young man and sings and plays music to lure young unmarried girls into his domain, of course, to the Nighter’s great frustration, the girl drowns as soon as she has entered the water. The Nighter is the Irish “translation” of the word Nykk, the English one is Nix.

Magical Grace upon the Wing,

Like a river, her teal hair flows,
Too beautiful to put in prose.
A finer creature, I have not seen,
This one must be a queen.

*****This Friday Fantasy is INTERACTIVE. Since I do love collaborating, I’ve written the first verse and Invite YOU to share additional verses Inspired by this Beautiful Artwork. Post your verse in the comments section and I will add them to the original verse throughout the day. Be sure to include your name and (if you like ) a link to your blog.