Last push..Breaking Into The Light is only down by a few votes! Please stop by, even if you voted already. You can vote each week and it’s super appreciated 😊😊😊

Thank You for your generous support. It means the world to me 🙂

I am so excited and proud to share the newly revised cover for Dark Fey The Reviled with you 🙂   Created by the exceptional artists working with my publisher, Creativia, this new cover exceeds any of my expectations and has me smiling like a Cheshire cat!!!

.
Winner of 2016 Readers Favorite 5-Star Review & Recommendation; Winner of 2016 New Apple Award for Excellence in Fantasy; Winner of 2017 Golden Book Award for Readers Choice and Judges Selection; and Winner of 2017 Book of the Year by Fresh Lifestyle Magazine. Dark Fey The Reviled is an epic fantasy filled with suspense, mystery, action, magic and romance. It shares the inspiration of hope; the resilience of love, and the power of forgiveness through a tale that is rich with beauty and horror alike.

Ayla has an especially rare combination of magical gifts: empathic telepathy, discernment, and the gift of healing.  Gairynzvl was abducted by The Reviled at the age of seven and suffered the intentionally cruel process of neglect, abuse and deprivation is designed to turn childfey from the Light.  Now, fifteen years later, he is a Dark One. He comes in shadows and silence; lingering near Ayla and trying to communicate with her.

Through her extraordinary gifts, she listens to him when no others will; she touches his pain and cannot turn aside from helping him, but the conflict with The Reviled that unfolds is exceedingly costly, pushing them to their limits and forcing them to grow beyond them.

Dark Fey The Reviled on Amazon

Thank you for sharing my delight 🙂

Once upon a time, many years ago (nevermind how many precisely!) a young girl with an Imagination that never quit dreamed of the day she would write a book. Words filled her days and nights, stories unfolding faster than she could write them down, and the joy of writing ignited within her with a fervent flame. Fast Forward a few years (I told you, nevermind how many!) and this young girl, now a grown woman, found herself at an event unlike any she had ever dreamed of: a Book Launch Party held with a handful of family and close friends. Standing before this smiling crowd, she pressed a single button on her laptop keyboard and INSTANTLY she was a published author! OH the Joy that then erupted! OH the Squeeee’s of delight! OH the Proud Smile of a Loving Mother, watching, nodding, like she had known it all along….

That was the day I published Dark Fey: The Reviled, book one of the Dark Fey Trilogy, which was at that point, just a plan; a notion of a story that was still unfolding, still evolving in my mind. Amazingly, that day was a year and a half ago! Since then, I have walked in the intrepid footsteps of other Indie Authors, learning along the way SOME of the secrets of independantly marketing and publicizing (though I freely admit I have a vast deal yet to learn). SO MUCH has happened since that day. I’ve been interviewed, spotlighted, asked to join other Indie Authors in their own book launch events; I’ve gained followers on social media faster than I can follow back, (no, honestly, not bragging, I promise!) and on top of all that, I had to deal with several huge hurdles in my personal life (which, if you follow BnV regularly you already know about so I won’t plague you with rehashing them here).

So to what sense of accomplishment do I now refer? Well, in the general sense, I refer to all of this. Because if you are a writer, which of course you are or you wouldn’t be here (unless you’re a photographer, naturally) you fully comprehend the Dream and the Challenges that go hand in hand with that Dream. In the more specific sense, however, I refer to the continuation of that Dream. The realization of what was once just a notion. A Plan that had no specifics, just ideas. Now (insert dramatic drumroll here!) I am Delighted to Announce, for those who have been patiently waiting as well as those who may not quite have any idea what I’m blathering about……

I have completed Book Two of the Dark Fey Trilogy.

YES!!!!!!!!!!!! You Heard me correctly 🙂 Dark Fey: Standing in Shadows is now complete! I am working (furiously, I promise!) on the final publication details and plan (there’s that word again) to have the BOOK Itself available by Thanksgiving (appropriately timed, wouldn’t you say?) BUT, in order to whet your appetite I will Share the Cover with you, which includes the most AMAZING photograph that exemplifies the title perfectly, taken by French Photographer David Gentet. (Thank You David for you KIND Permission to use your Beautiful Photograph!) You can find more of his amazing photography on his Deviant Art Gallery here: http://uraeus82.deviantart.com 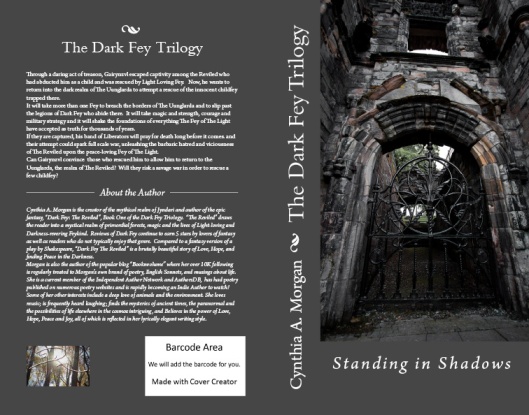 SOOOOOOOOO what do you think? Personally, I LOVE IT!! (the barcode information will, naturally, be updated as soon as the book is ready for publication) Curious to know a little more about Dark Fey: Standing in Shadows? Well, since I am feeling generous:

Gairynzvl escaped captivity among the Reviled, who had abducted him as a child, through a daring act of treason and was rescued by Light Loving Fey. Now, he wants to return into the dark realm of The Uunglarda to attempt a rescue of the innocent childfey trapped there.

It will take more than one Fey to breach the borders of The Uunglarda and to slip past the legions of Dark Fey who abide there. It will take magic and strength, courage and military strategy and it will shake the foundations of everything The Fey of The Light have accepted as truth for thousands of years.

If they are captured, his band of Liberators will pray for death long before it comes. and their attempt could spark full scale war, unleashing the barbaric hatred and viciousness of The Reviled upon the peace-loving Fey of The Light. Can Gairynzvl convince The Fey of the Light to allow him to return to the Uunglarda, the realm of The Reviled? Will they risk a savage war in order to rescue a few childfey?

Dark Fey: Standing in Shadows, Book Two of the Dark Fey Trilogy will be going on sale Soon.
.
~Morgan~
.
.
.
Wine Photo found on Pinterest. Credit Acknowledged to the original photographer.