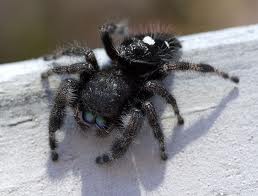 Sleeping with the Enemy

Let me begin by saying that I am arachnophobic. Always have been, always will be. I’m that person that goes into an unparalleled fit of screaming, shaking, and running in the opposite direction whenever those creepy-crawly eight legged monsters are around. I’m the person who wakes up in the middle of the night and strips her bed to the bare bones to make sure there isn’t one or millions of those hairy, spindly, multi-legged freaks somewhere amongst the covers. Or under the bed. Or on any of the coordinating furniture. Or lying in wait on the drapes until I go back to sleep, so it can then descend on me in the darkness of night to send me into the aforementioned paroxysm. I’m also the person who once had to single-handedly dispatch a gargantuan, tarantula sized, octoplet-limbed creature of terror who had taken up residence in my bathtub!!! (insert frenzied shrieking here!)

Fast forward now, from that ghastly day, to this morning where you will find me (hypothetically speaking) lying in my bed, dreaming sweet dreams without care; dozing the morning away because it’s finally a Saturday and I don’t HAVE to get up early. (and the congregation shouts AMEN!) I wake up, lazily search for the clock, realize it’s not even 8 AM, smile triumphantly, roll over and promptly resume my reverie. My mind drifts aimlessly through wisps of dreams still clinging to my memory; lingers over musings of hazy imaginings and teeters on the pinnacle between conscious thought and transcendental hyperbole.…until, at last, I open my eyes and stare at the ceiling… you know the sensation…trying to remember what planet I’m on.

My thoughts shift from mystical to rational, (darn it!) I begin to strategically plan out my day, workout and the subsequent primping and preening that follows, breakfast, errands, financial concerns, laundry…yeck! Oh To sleep, perchance to dream! (sorry, snuck some Shakespeare in there on ya!) But this fair thought, now ended; I must rouse myself to the full and stumble on…( that part’s not Shakespeare, that’s me being “poetic”. Shakespeare always merits Italics) So, up I get and up gets the cat (his name is Little Orange Pooz, but that’s yet another post). I turn to make up the bed and then I SEE IT! A black, fuzzy, eight-legged beastie fully the size of a quarter (OR for my British friends, a one pound coin) sitting on my curtain just above my pillow !!!!!!!!!!!!!!!!!!!!!

Typically, this is the instant where the heebie-jeebies take over, the moment when rationale goes out the window and an inescapable spasm of insanity runs riot over me. I stare in dismay, but to my utter bewilderment and astonishment, I neither freak nor flee. Rather, although I have no comprehension of why, I stand there, LEAN CLOSER, and gaze at this little furry monster more intently. I can see he’s not moving; he’s almost curled up, and for half of a fleeting second I almost smile!!! He’s sleeping! Is he dreaming? What does a spider dream about, I wonder paradoxically. Does he dream about dropping down from the ceiling in the middle of the night onto unsuspecting, sleeping young women to send them into riotous fits of irrational fear all for the sheer hilarity of it?

Who cares!!!! I shake myself…it’s a spider!!! In any other situation, I would instantaneously grab the nearest shoe and start screechin’ n’ swingin’! But, instead, I find myself walking calmly (albeit briskly) to the laundry cupboard, retrieving a duster (a long handled one to be sure!), and returning to the scene of the crime to patiently coax this denizen of hideousness onto the fluffy fibers of his waiting conveyance so I can carry him (once again, at a BRISK pace) to the door and deposit him on the first green growing thing I can find.

Ok….what’s the deal? How can this be? What alternate reality did I wake to this morning that would find me inquisitively regarding and then effectively sparing the life of my lifelong nemesis and archenemy? Is there some lucid explanation for this, otherwise, inexplicable deviation from the norm? I spend the next several hours musing over the possibilities. It could be simply that I hadn’t yet had a sufficient intake of caffeine, was still half asleep and not thinking clearly. Or it could be, perhaps, that I was so surprised I didn’t have time to think about it, really, completely. Or my body could have been taken over by aliens in the middle of the night and I was under some form of extra-terrestrial manipulation!

I guess the most likely, if least appealing, explanation is that I’ve changed somehow, in some way as yet not quite realized, or at least not quite realized until this morning, and I’m left to wonder… Is it possible that change isn’t as tedious and complicated as we always think it will be? Perhaps, every now and then, change comes quietly, when we least expect it, like a furry, not so little, spider tiptoeing into our room without us even noticing it. Curling up beside us while we’re not paying attention, it lies, waiting to be discovered and, ultimately, it transforms us into someone we barely guessed we could be.

15 thoughts on “Sleeping with the Enemy – Thoughts on #Perspectives”