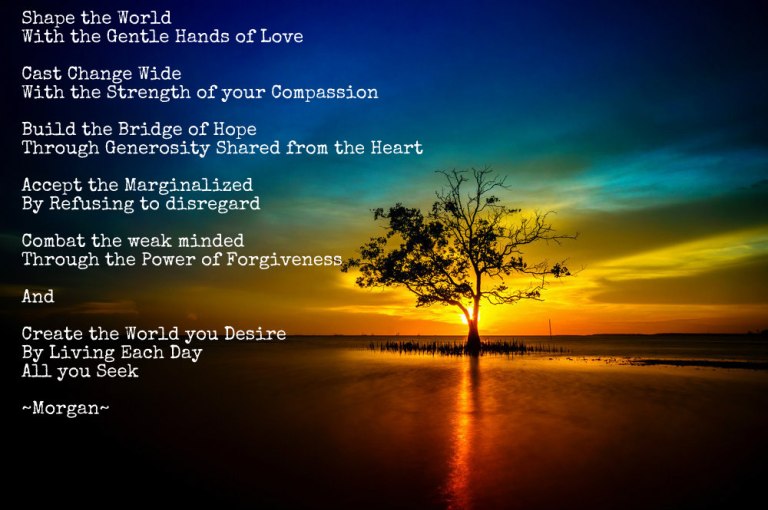 I don’t talk politics publicly.  It’s one of those unspoken unspeakable rules…one of the three things you never talk about socially…but every now and then you have to speak your conscience, don’t you?

“The only thing necessary for the triumph of evil was that good men should do nothing.”- Edmund Burke

I agree.  I also think you can easily add ‘to remain silent’.  If someone was being beaten and you stood by and neither said nor did anything to stop them, you would be as guilty as the aggressor, wouldn’t you?  It’s within the nature of human beings to respond, to react; at least, I still have hope that it is, but I can certainly understand why so many look at the world today and shake their heads with despair.  I do.

We are all unique and have different strengths and individual natures. My nature, as many of yours, leans very strongly toward empathy and compassion.  When a child cries, I immediately need to know if they are all right.  When someone is hungry, I want to give them something to eat.  When an animal is mistreated, my entire spirit weeps in agony.  There are So Many Innocent victims who suffer in silence because they can do nothing else.

But surely we can, can’t we?  I know we are surrounded by violence and hatred and despicable acts I can barely comprehend, but are we not also surrounded by people of a similar nature and spirit as our own?  Are there not just as many longing for some good in this world as there are those who are aggressors and violators? Where does it end?  If we want Peace, do we not need to become Peace? If we long for Love, should we not first Love?

I say all this as a preface because what I really mean to say is that I look at our government and feel such anger. I watch their inaction in monumental proportion and rage against the cold machinery of it all.  I listen to each side trying to prop up their greed and dishonesty with even greater deceptions and avarice while I long for just one good person to stop doing Nothing.

What would it take for ‘one representative of the people’ to say “I refuse to let this continue.”

What might it mean for one to say, ‘If hundreds of thousands of Americans are not being paid because we cannot find a way to practice democracy and come to a compromise, than neither shall I take pay.”

How much good could it possibly do if we stood together as a community, rallying round each other in support of one another, rather than finding offense in everything someone may or may not say or do; rather than faulting them for perceived wrongs or disagreeing with them simply for the sake of feeling stronger, more powerful, bigger?

AH Utopia.  The Dream within the Dream.

Or is it a dream? Why must it be only a dream?  Why can’t it be more?  Why, in this hour of chaos and calamity, can we not stand shoulder to shoulder as a people and Demand Change?

Perhaps because until chaos and calamity hits our own front door, we are free to look away, shake our heads and say whatever we feel like saying against the absurdity of it all.  Perhaps, until one of our very own is affected personally, goes hungry, is denied the basic necessities over an argument that, in reality, is merely a show-piece for posturing and pretense, it is too easy to employ apathy.

If we could feel the pain of a stranger as deeply as we feel the need of a loved one, the world would truly begin to be a better place.  If we want Peace, we need to become Peace. If we long for Love, we first must Love.

9 thoughts on “A Better Place – #Thoughts on #Humanity, #Utopia and #Politics”