I was Recently asked to give an interview with the Indie Sci-Fi-Fantasy Website and, in light of it not only being Friday Fantasy, but also the Kick-off of my Dark Fey: The Reviled 99cents Sale weekend (to give those who may not have read it yet one last shot before book two, Standing In Shadows, Releases Next Week!) AND because it is once again (nearly) time for my Lime Light Weekend post, I decided to share the Lime Light with myself. (I do hope you won’t mind terribly!)

You know me well enough, methinks, so shall we dive straight in? Great…got your chai/tea/coffee?….Ok here we go:

1) When did you first discover your love for writing? My love for words has always been with me, even before I could write, although I have been writing poetry and stories since elementary school, but the passion truly took hold when I was a teenager. It was then that I began working on my first novel and knew I wanted to be a professional writer.

2) Do you have a favourite place to write? Less a favourite place and more simply the only place I have at present to do so, which is in my dining room. However, my favourite TIME to write is when it gets dark. When the sun goes down, the Inspiration and Creativity within me seems to switch on.

3) Do you have a writing routine or process that you adhere to? I am not a plotter; I don’t use worksheets or create flowcharts, but I will think a scene through for a few days before writing it. I envision the location; I rehearse what the characters will say in order to familiarize myself with the emotions involved, the characters motivations; I try to see the scene like one from a movie so I understand all its details and nuances. Only when I clearly see what is happening and where the scene is going do I sit down at my laptop to write it. Then, when it’s written, I repeat the process for the next scene.

4) Are there any authors or specific books you aspire to? My preferences lean towards classic literature, Charles Dickens, Jane Austin, Tolkien and of course Shakespeare and I do tend to use language in my writing in a manner that might remind a reader of classical writing, but I also enjoy the books of Philippa Gregory.

5) What inspired you to write Dark Fey? The original idea for the story of Dark Fey came to me in a dream. The imagery was vivid and compelling, so much so that I couldn’t stop thinking about it and the longer I thought about it, the more the story evolved and grew into an inspiration. I finally sat down and wrote out what is now Chapter Six of the book. Once I did, the wheels of my imagination started turning, spinning the scene into a tale and, before long, I realized there was enough story-line for more than one book.

6) Can you tell us a little about your book? Dark Fey, The Reviled is epic fantasy set in the primordial forests of mystical time in a land peopled by both Light Loving and Darkness Revering Faeriekind, or Fey. It is a tale of Light and Darkness, of Joy and Sorrow, the Loved and the Unloved. It shares the Trials and Triumph of Courage and Perseverance.

In the mystical realm of Jyndari, a relationship between two unsuspecting, yet kindred souls who are separated by far more than social stigma, blossoms in secrecy that could shatter both their worlds. Ayla, a Light loving, Guardian of Childfey hides more than a few secrets; secrets that isolate her and set her apart. Secrets that bring her to the attention of one who comes in shadow and silence; one who watches, waiting for the ideal moment to step from the darkness, reveal the truth about himself and alter the course of her life forever. Gairynzvl is a Fey of the Light who was abducted DemonFey at the age of seven. Stealing him from his home and the family who loved him, they forced him to endure The Integration. During the torturous process of cruel disregard and abuse, he was forced to commit acts of savagery designed to break the spirit and turn young fey from the Light to create a monster instead, but Gairynzvl clung to hope in spite of everything.

Fifteen years later, he finds the one spoken of in the ancient texts; The Guardian whose extraordinary gifts of empathic telepathy might be the only reason she trusts him. Quietly, patiently, he reaches out to her, speaking to her out of the darkness through the whispers of his thoughts. If she listens, she might understand, but if she reveals their secret he could lose his life at the hands of the Fey Guard.

Through an act of treason and a battle with a full legion of Reviled, he escapes his captivity and with Ayla’s aid Gairynzvl undergoes The Prevailation, an ancient ceremony that transforms him back into the fey he once was, but nothing can instantly heal the torment and grief that haunts his mind. This anguish still connects him to the darkness; not to the DemonFey who created it, but to those he had to leave behind: the other abducted childfey who suffer The Integration every day.

Can he convince Ayla and The Temple Elders to allow him to return to the Uunglarda, the realm of The Reviled? Will they risk a savage war in order to rescue a few childfey?

7) Do you have a favourite amongst all your characters? Yes, although it’s rather like having a favourite child. Still, I find Gairynzvl increasingly intriguing as I write him. He continues to grow in complexity and often feels very real to me (although I believe if your characters are not real to you, as the writer, they certainly will not come across convincingly to the reader.) I sometimes find myself apologizing to him for what I’ve put him through and, although it was not intentional, he has become the lead character in the second book of the series, Dark Fey, Standing in Shadows.

8) Does your book contain a message for readers to consider? Beneath the drama; behind the romance; and perhaps in spite of the darkness it contains, Dark Fey shares a message of Hope for the seemingly hopeless. It is about the discovery of the abilities that may set you apart, but also allow you to offer something unique and the potential that exists within all of us to turn from the darkness of the world around us in order to do something good.

9) Would you be interested in sharing a teaser? I am always happy to entice a prospective reader and offer a full free chapter on my blog at: http://wp.me/p3C4k1-2WK but here’s a small excerpt for the uncertain:

Clutching her candle, she drew a deep breath, kissed the tot’s head reassuringly and darted along the hall toward his cribroom. A small lantern stood upon his night table, she only need reach it and light it in order to keep him safe. She stopped at the darkened doorway and peered inside, her sight piercing the ebon shades and her own glimmering aura lending illumination. Stepping into the dark interior, she reached immediately for the lantern, yet even as she touched its cool, brass sheath a shadow contracted in the far corner of the room and she froze in instinctive terror.
The shadow grew darker, denser, then spread outward into the dimness of the room not brightened by Ayla’s small candle. Roshwyn in her arms squealed and began to cry louder and she cradled him more tightly, protecting him with her diaphanous wings as her mind spun in alarm.

Light the lantern! Speak the words of protection! Flee!

It was too late.

A Dark One stepped out of the shadows and glared at them with ophidian eyes. The flame in her hand guttered and threatened to go out, but she had no other means of protecting it than repeating her lighting spell with a timorous tone. Shadow swirled about the Dark One like smoke curling around embers and she watched in perfect dread as he slowly reached out his hand toward them.

10) What would say has been your biggest challenge and achievement in writing Dark Fey? There have been several hurdles along the course, but initially the challenge was simply to finish it. I have quite a few books in varying stages of development, so committing myself to concentrating on one from beginning through to completion was no small undertaking. The next test was to start working on book two: Standing in Shadows, which took several months to finally inspire me. And, of course, as is the case with many Indie Authors, there is the ongoing challenge of finding representation by a credible agent and publisher.

11) What have you learned about yourself as a writer through writing Dark Fey? Much as my characters, I’ve learned how to trust my own ability (as a writer) and have found confidence in promoting my work through my blog as well as social media. I have also “found my voice”, as it were, and have learned to be true to my own style. I am still learning about the art and magic of words, as well as the intricacies of the industry, and hope never to stop.

12) Do you have any advice for other aspiring authors? Trust yourself, Be True to your craft, don’t be afraid to fail (as long as you learn from your errors) and Never Stop Trying. They might all be prosaic, but they are also time tested and true. Always remember, even great literary giants, such as Charles Dickens, started out as Self-Published 

13) Anything else you would like to say? Being a self-published author is all about finding and taking hold of new opportunities and I should like to thank you for the opportunity to share a little of my story with your readers.

14) And finally, do you have any future works planned? Book Two of the Dark Fey Trilogy is nearing completion. Standing in Shadows is set for an Autumn release and, of course, afterward, Book Three of the Series (the title of which I have not yet released) I also have a Historical Fiction Romance/Drama novel I am working on, as well as plans to release books of poetry. 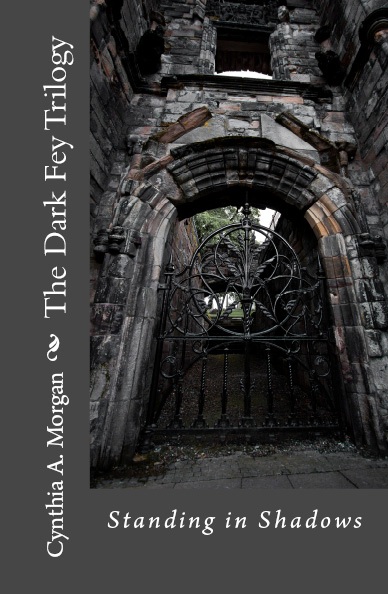 Thanks for indulging me…Happy Friday Fantasy…or…in the words of High Celebrae, the sacred language of the Fey of the Light “Jocyndrae Vite!” Let us Be Festive! 🙂