Do you enjoy Fantasy, Celtic culture, Goddesses and Magic?  P.C. Darkcliff’s fantastic Historical Fiction is Sleeping Beauty and Faust all rolled up into one!

A young Celtic woman called RAWENA runs into an army of Germanic invaders. The soldiers pursue her, but she shakes them off and hides in a vast swamp. There she awakens the Goddess PANDEMIA, who has been sleeping for millennia. The meeting shocks Rawena, but Pandemia also wonders: she thought she wiped all humans out with pestilence.

Pandemia plots to destroy humanity to preserve other animal species. She wants Rawena to infect her tribe and spread the plague around the world. When Rawena begs her to spare her, Pandemia gives in… but she orders Rawena to bring another human to the swamp.

Rawena seeks GARUX, a tribesman she loves, hoping that he would catch a Germanic scout and bring him to Pandemia. That’s when she realizes that Garux loves her younger sister ARVASIA.

Mad with jealousy, Rawena kidnaps Arvasia and drags her toward the swamp. When Garux attacks her in the woods, Rawena stabs herself through the heart.

The Celts bury her, but Pandemia brings her back to life and makes her immortal. She turns Rawena into a pawn in a mad game: Rawena must unleash pestilence whenever somebody stabs her through the heart. If she doesn’t, Pandemia would turn her into an eternal rat and trap her in the swamp. The same fate would await Rawena if she let someone behead her or burn her to ashes.

Fearing that the Celts would burn her as an evil spirit, Rawena seduces ORTAVER, the Germans’ high commander, and asks him for protection.

The Germans overtake the Celtic town. They imprison Garux, who has recently become the chieftain, and enslave the tribe.

Four years later, just as the Celts start a revolt, Rawena dresses as a Germanic jailer to free Garux—and Arvasia sneaks into the prison and spears her heart. As a battle breaks out, Rawena crawls into safety. Pandemia mends her and gives her a month to unleash the plague.

Garux and Arvasia look for her all over Bohemia but cannot find her. The king refuses to help them; their druidess fails to reclaim Rawena’s soul. And the Germans plot revenge.

Pandemia tells Rawena that Ortaver and the remnants of his army have settled in an abandoned Celtic village. Rawena joins them there and infects Ortaver with her pestilential blood. Just before he dies, Ortaver spreads the plague among his men.

The Celts corral the Germans and contain the outbreak, but Arvasia falls gravely ill. Although she fears it’s the plague, it’s only morning sickness. Garux and Arvasia rejoice about the pregnancy. Then Arvasia miscarries.

They corner Rawena and are about to behead her to prevent her from causing another outbreak, but Pandemia rushes to save her. Before she takes Rawena away, Pandemia tells Garux and Arvasia that their baby died of the plague. And that she made them immortal to witness Rawena’s work of doom.

Garux and Arvasia swear they will not rest until they destroy Rawena and defy Pandemia.

When he was in kindergarten, P.C. managed to convince his classmates that his grandma was a tribal shamaness. Then he learned his letters, and kidding his friends no longer seemed adequate—so he started to write.

Apart from Celts and the Mad Goddess, P.C. has published two standalone novels and an anthology. His short stories have been featured in various publications.

He has lived in six countries and on three continents. Although ruinous to his bank account, the seminomadic lifestyle has been hugely inspirational, and many of his adventures have spilled into his stories. He and his wife have settled in southern Spain, where he goes swimming and cycling whenever he isn’t too busy writing.

Join his VIP reader list to get his debut novels for free!

Find him everywhere on social media in one click

PURCHASE LINKS: Amazon  OR  Other ebook retailers
.
I would like to thank P.C. Darkcliff for sharing his amazing story with BnV and WMM.  (Word Mongery and Musings!)  It’s always a delight to share new books by new authors : )
.
~Morgan~ 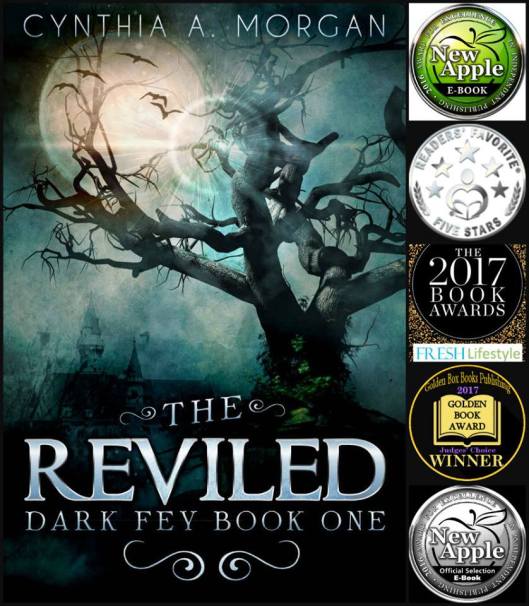 I am so Blessed and Delighted by this amazing review of Dark Fey The Reviled, I simply had to share it with you 🙂

Didi Oviatt Author recommended The Reviled: The Power Of Hope (Dark Fey Book 1). a day ago
If you’re looking for a Fey fantasy book with a well rounded blend of good and evil, all warped into one climatic adventure… then look no further than The Reviled, by Cynthia A. Morgan. It’s the first book in a series, and I look forward to reading the next books in the set! This author has been on my to read list for some time, and now that I’ve dove in, I’m a little disappointed in myself to have taken so long to pick up one of her books!
The characters in this book are well developed, especially the main character Ayla. I really like her. She has a kind heart and a brave soul. Being a particularly gifted Fey of the light, she’s been blessed with sight that goes beyond that of the average Fey. She can feel the presence of those around her on a different level, her telepathy is unique and her magic runs deep. She’s been given the job of watching over the young Fey, as to do her part in protecting them from those of the darkness and shadows.
You see, there’s another dimension that contains the Dark Fey and in the protection of the shadows they lurk, waiting to snatch up the young Fey and turn them to their dark side. But what happens when they take a Fey of the Light that is a bit older than usual, who is stubborn and possesses a certain incomparable strength?? Gairynzvl is what happens, and he’s possibly my favorite character. He spent a lifetime being tortured and forced to perform acts of unspeakable evil. However, his determination to return the light cannot and will not be brushed aside.
Gairynzvl went behind the backs of the Dark Fey Legion, and found a way to access Ayla. He watched her for months from beyond the shadows, feeling her power, and longing for her help. One night he crossed a portal and surprised a frightened and ignorant Ayla. She’d known she was being watched and followed all along. She’d felt his presence and known that he wasn’t a threat to her, yet brought with him great danger. Together, and with the help of Ayla’s friend, they worked their taxing magic and fought hard to bring his presence back to the light, but at what cost??
The Reviled offered sacrifice, love, battle, and heart thumping action. It has it all, and I highly recommend it to all fantasy readers!
Find Dark Fey on Amazon
Dark Fey The Reviled on Audible
.
Thank You Didi Oviatt for an amazing review.  I’ll be smiling all weekend!
Find Didi on WordPress
.
~Morgan~