A brief excerpt from The Mercy Series

Insidious laughter echoed from the darkness clawing at him like a ferocious monster.  He felt the sensation of spinning, yet knew he was lying on the cold stone floor of his cell.  Strangely, his body no longer burned with pain so intense it threatened to tear his reason from him.  Instead, he felt nothing at all.  Weightless and spinning, he tumbled into the abyss that yawned greedily before him.

“He is lost.” It was the same deep, resonant voice he always heard, but now it spoke from somewhere above him.

“He is not!” Another voice rebuked the first, its tone more determined, but equally far away.  He recognized this voice as well and struggled to answer, but he could make no sound.

“He allowed them to vanquish him.”  The first continued, sounding both angry and accusatory.

“He cannot be vanquished.”  Again, the second rebuked the first. Then a third voice leeched into the darkness, its words a rasping, guttural hiss

“He is human. He is weak and worthless.”

Angry cries filled the darkness in response to the serpentine voice, but it continued more loudly.  “Your plan was faulty and has failed!”  This claim was echoed by peals of rancorous laughter that faded into utter silence.

The silence was long and deep.

The blackness around him was heavy and thick.

“Don’t let him die.”  A small, unobtrusive voice permeated the impenetrable blackness.  It, too, was a voice he recognized, but it was overpowered by ruthless shouts of obscenities and derisive howls so vulgar he felt ill to hear them.

He would not allow them to take him.

He was neither human, weak, nor worthless!

Concentrating with intensity he had not summoned in many eons, he reached up through the darkness.  It opposed his effort, pulling at him insistently, but he didn’t surrender to it.  Straining against its oppressive pull with all the force his essence could summon, he looked upward and saw a shimmer of light.  He grasped for it, clawing his way upward through the thick, slurking darkness that clung to him.  His determination was greater than its malevolent pull.  Exerting himself to his limits and then beyond them, he growled vehemently with effort, reaching for the light, clambering upwards against the energy of a thousand demons dragging him down.  He writhed up from the clutching blackness as every ounce of strength he possessed poured out of him like blood.

A Teaser from Misericorde (Mercy Series Book One) 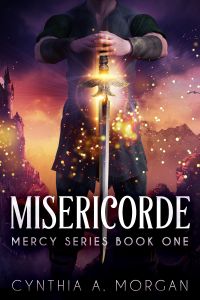 It’s the year 2446, and the first three Horsemen of Revelation’s Apocalypse have ridden.
Pestilence, War and Famine have changed the world into a dictatorship ruled with an iron fist. Commoners have few rights, and liberty is a distant memory.
Before the final Horseman is released, the Archangel of Mercy – Tzadkiel – makes a bold plea, asking for permission to find even one human who remembers the meaning of mercy and compassion. He is given 100 years, until Death will sweep across the land.
Taking human form and coming to Earth, he finds a place ruled by greed, hatred and fear. With time running out and Death growing impatient, can Tzadkiel find what he’s looking for… and how much will he need to sacrifice?

Artwork found on Imgur.  Credit Gratefully Acknowledged to the Original Artist.
Thank You~