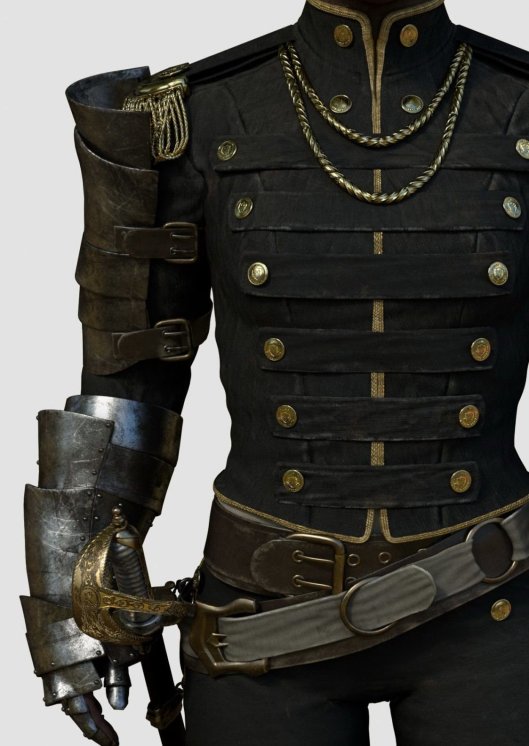 As a result of the recent poll I took on WP, as well as Facebook, I was finally able to dress my main character from Angel of Mercy.

The uniform Lévesque had given him was that of a regimental officer made of black leather that did not immediately impress, particularly when folded up lying upon a blood-stained table.  The black leather pants were snug, trimmed with gold embroidery and dressed by a triplet of golden buttons embossed with the Eminent Protectorate’s seal on either side of this trim just below the hip.  The snug-fitting coat was also embroidered with golden trim, set off smartly by a double row of similar golden buttons that ran along the outside length of the coat and collar. Individual straps of black leather closed the coat by crossing the front of it from one button to the other, while epaulettes, which also bore the EP seal and looping golden fringes, were set off by two golden cords ornamentally draping the neckline.

Black leather boots with lacings and a wide leather belt completed the ensemble and after putting everything on, he walked with a purposeful stride to the small dais upon which Jshunamir was displayed.  Taking up his own baldric of soft gray leather, the only thing that remained from what he had been wearing on the day he encountered Lévesque, he cinched it loosely round his hips and picked up his sword.  Unstained and untarnished, though it had not been cleaned, it glittered as beautifully as it did on the day it was forged; it’s inlaid runes glimmering with a silvery light all their own. Sheathing it, he turned back toward the table, noticing Lourdes at last who stood watching him with an unguarded stare.

Smiling subtly, he met her gaze, the deep lavender of his eyes searching hers, but she closed her and looked down at the bundle she carried, clearly unable to express herself.  Crossing the floor with an unhurried stride, he looked down at himself and then back to her with an openly curious expression.

“Does it suit me? I think it’s a bit,” he paused, seeking the correct word, but she finished his sentence for him, her tone openly approving.

Tzadkiel is the Archangel of Mercy, sent to earth in the 4th era after the first of the Four Horsemen have ridden. He is looking for one human among those who remain who still understands Mercy.  He’s been looking for nearly 100 years, but he’s finally found her…a young servant named Lourdes.

Just a taste of the work in progress….

2 thoughts on “Angel of Mercy #Preview of a #FantasyCharacter”

every life is special

No Time For Pants