It is a beautiful thing. There are so many types of rain, really, and I couldn’t tell you which sort I prefer more (unless we are including the fluffy, white, frozen variety that I love most of all, in copious quantities, as frequently as possible.)

There’s the light, misty kind that I tend to envision whenever someone talks about Great Britain. That type of drizzly, foggy rain that hangs over the landscape, penetrating every crevice, enveloping whatever it touches in a hazy shroud, and leaving ten thousand beads of incandescent diamonds in its wake that sparkle and scintillate when the light reappears. (Sounds divine, doesn’t it?) Oh, it’s also that deceptively inconsequential form of rain that doesn’t look like much until you walk out in it without your brolly.

There’s the freezing drizzle, or frizzle; that sinister variety of rain that usually arrives overnight and surreptitiously transforms the garden path, car park, or the front steps into a skating arena suitable only for Olympic athleticism. It’s that quirky classification of rain that warps and blurs everything into unrealistic, Photoshop-worthy deviations of reality that makes most of us grab our camera’s (ie. Phones) to record and share the surreal, Dr Suess-iness of it all. This category of precipitation doesn’t initially impress either, so you generally disregard it until you have to go out and then promptly wind up on your….. 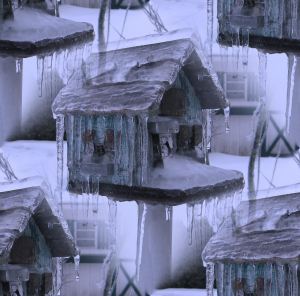 There are many classifications of thunderstorms as well. Those that pop up in the middle of a sweltering, summer day just long enough to make us all run for cover; the kind that create a lot of noise for 20 minutes and then disappear into a haze of steam. There are those that roll overhead in the hiatus of evening, fast and furious, full of sound and fury, (signifying nothing?) that do little more than make a mess, generally. And then there are those magnificent, cacophonous, tempests that jar you from sound sleep in the middle of the night with ear-splitting thunder and shocks of lightening that leave you wondering if you couldn’t hide under the bed with the cat.

There’s also the awe-inspiring, stop-you-dead-in-your-tracks kind of rain that makes you stare out the window in astonishment, forces you off the road in your car because you can’t see one inch ahead or behind, and makes you wonder for a fleeing, transitory moment if there isn’t an arc being built someplace nearby that you perhaps ought to be booking passage on: those torrential downpours of cats and dogs (and monkeys.)

Then there’s the steady, pervasive, day-long kind of rain that sweeps over the earth, softly falling hour by hour, never flooding, never rumbling, never wreaking havoc. This is the kind of rain that looks like a painting by Monet or Van Gough; that smells so sweet you inhale the scent of it deeply and can’t help sighing. It’s also that sort of precipitation that makes you want to pull off your shoes like a child, go out and splash in the puddles.

Much like life, we can’t control the rain; what kind of rain it is, how hard it falls or for how long, but we can control how we respond to it so that we neither wind up soaking wet wishing we had protection from the rain, staring in dumb-struck wonder at the rain fearing what might happen next because the unanticipated variability of the rain caught us completely off guard. Rather, we can stop to enjoy the rain, whatever its form, inhale deeply, and allow ourselves to be refreshed and renewed before we plod on.