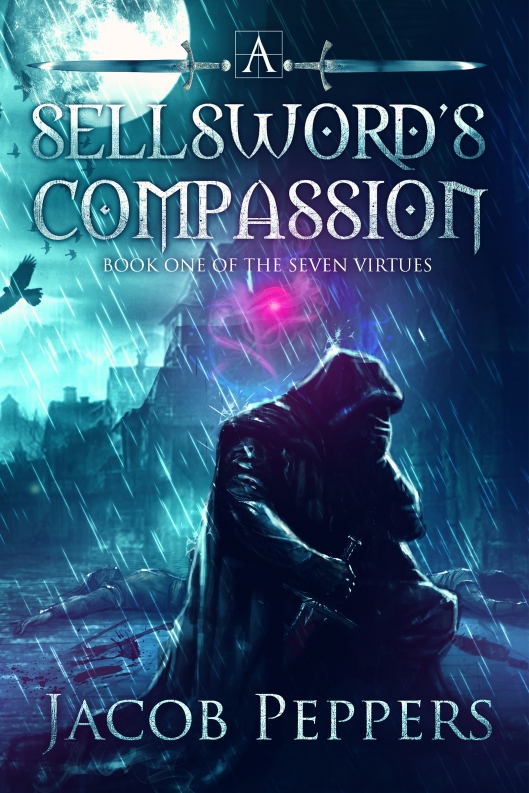 I recently met Fantasy Author Jacob Peppers via Facebook.  Really what caught my eye was the cover of his new release.  I was just drawn to the character, wondering what was happening and why he looked so distressed (so me, right?!)  So I reached out the Jacob to see if I could find out more.

Jacob Peppers lives in Armuchee, Georgia with his wife and three dogs.  His short story, “The Lies of Autumn,” was  a finalist for the 2013 Eric Hoffer Award for Short Prose.  His other short works have been published in various literary journals.  He is the author of A Sellsword’s Compassion, a debut fantasy novel and book one of The Seven Virtues, and The Silent Blade, a Seven Virtues novella.

Hi Jacob..Thanks for taking some of your valuable time to chat with me about your writing and your book that so intrigued me.  So tell me…..

What Inspires and stirs your creativity? Oh, that’s a pretty long list.  I’m much more of a discovery writer than a plotter; I tend to write from situations and, at most, will have a few scenes I know I want to include in the book when I start a draft.  Because of this, I’d say I’m inspired daily–books I read, movies I watch, and interactions I have.  All of those feed into the writing, and I think, for me at least, they help to keep it fresh and challenging.

Tell us about your book(s):
My recently published novel is A Sellsword’s Compassion.  I published it with an accompanying novella, The Silent Blade, that comes before it in the chronology of the world.  As for A Sellsword’s compassion, it follows Aaron Envelar, a jaded sellsword who lives in the poor district of one of the kingdom’s major cities.  Aaron stumbles on the assassination of a prince and ends up getting wrapped up in a conspiracy involving the remaining royal siblings who are all battling for dominance of the kingdom.  Aaron finds himself followed by mythical assassins, a man with superhuman strength, and a ball of light claiming to be the embodiment of compassion.  The last makes for some fun back and forth when you have a man whose life has taught him only to look out for himself, and he ends up feeling things in a way that he hasn’t in a very long time.  Of course, he also gets some special abilities because of it, so maybe it’s an even trade.

What genre do you prefer to write or are you truly eclectic?
I’ve written in quite a few genres.  It’s in my nature to have a lot of projects going at once which is why I’ll be releasing The Son of the Morning, book one of the Nightfall Wars in early November, and another, as of yet untitled, novel in early December, another first for a series.  I write on a lot of things at once, so I try to make this up in volume, minimizing the wait between sequels as much as possible.  My short stories range from thriller to literary to horror and The Lies of Autumn, the short story that was the finalist for the 2013 Eric Hoffer award, is really a suspense story.  That being said, my biggest love is always for fantasy–what can I say?  I’m a grown man that loves magic.

What do you feel is your best advice to share with other aspiring authors?
Best advice?  Well, I’ve heard some great advice in my time so that’s a long list.  I think one of the major themes of Stephen King’s book, On Writing, encapsulates some of the best advice I could give.  If you want your writing to be your job, treat it like your job.  You don’t watch Netflix for five hours while you’re on the job–not if you want to keep it anyway.  You put in the time and you put in the effort–the book doesn’t get finished by magic.  Although, sometimes it can seem like it did.  Otherwise?  Brandon Sanderson has made some great points on this in his YouTube videos of his Creative Writing classes.  For example, any book or movie that I really like, I try to dilute that down as much as possible and ask myself what it was that struck me?  What was so powerful that I lost sleep to read it or to watch it?  That was some great advice for me, and I don’t think anyone would disagree that those two guys know what they’re doing.

When you are NOT writing, what is your favourite pastime?
Hmm … sleeping?  No, seriously, I tell people you can describe my life by the three W’s.  Writing, working out, and spending time with my wife (in no particular order, of course, I’d rather not get divorced today.)  Aside from that?  Ping pong, video games, just about anything that gives me the chance to beat someone else–I have a tendency to be pretty competitive.

Describe Your Dream Getaway Destination.  Have you ever been there?  What makes this place Irresistible to you?
That’s easy–Ireland.  My wife and I went there a few years back, and it was incredible, the most beautiful place I’ve ever been.  I guess it’s hard to pin down one thing that makes it so irresistible.  It’s so green there, so uncultivated.  I’m a country boy at heart, and I’ve a love for open spaces, I guess.  It’s also the way people are there–the pace of life is slower and that’s a part of it but not all.  I’ll tell you this–we were there for over a week, and I heard one horn honk the whole time; it was me when I was climbing out of the admittedly disappointing rental car.  Overall, I think there’s just a rhythm, a beat to the culture that’s subtle but powerful anyway.  I love it, that’s all.  I’d be there right now if the wife gave the go ahead but hey?  We live on hope.

Do you have a Rule to Live By?
Oh, probably a billion of them.  I guess the one that I always tell myself, at least regarding my writing, is that there may be people out there (and there are, I promise, plenty of them) that are smarter than me, people who are better or more talented, but there will never be someone that works harder than me.  I’m a big believer in controlling the controllables and letting the rest fall away.  Cormac McCarthy addresses this in No Country for Old Men (one of the best books I’ve ever read) and I’m paraphrasing here, but basically it says if there’s nothing to be done about it, it’s not a problem it’s just an aggravation.  I believe that, but I think that means also that, for me at least, I need to hold myself accountable to doing everything I can, as often as I can, the best that I can.  It’s something I tell myself every time I sit down to write and, hopefully, it shows though in the books.